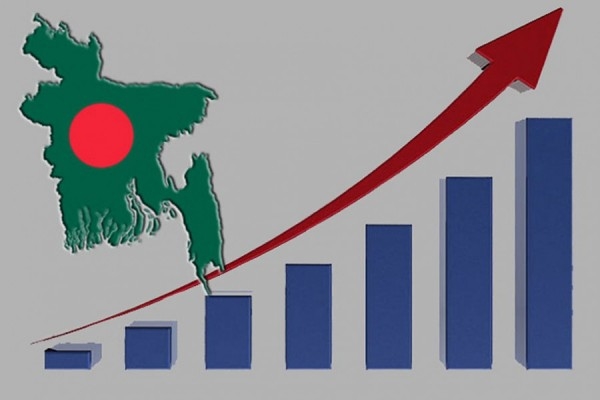 The structure of Bangladesh's economy is quite different from India's. Unlike India, where the services sector contributes overwhelmingly while the industry's contribution is much lower than desired, Bangladesh has a booming industrial sector.

The latest economic outlook update released by the Asian Development Bank (ADB) has shown how Bangladesh, and not India, is the standout economy in terms of growth momentum in South Asia.

As charts 1 and 2 show, Bangladesh is experiencing a high and consistently rising economic growth rate while maintaining a stable level of inflation, reports The Indian.

For instance, since 2016, Bangladesh has been growing at over 7.0 per cent and this financial year will see it cross the 8.0 per cent threshold as well – a mark it is expected to hit again next financial year, according to ADB estimates.

The other big economies of the region either have modest (like Sri Lanka) or fluctuating (like Pakistan) growth rates to offer.

India has seen a secular decline from the highs of 2016. The constant flow of falling sales and declining industrial productivity data suggests that the current financial year is unlikely to see a big enough change for India to get anywhere close to the 7.0 per cent-mark.

However, ADB expects the Indian economy to turn around in the next financial year when India is expected to grow by 7.2 per cent.

The structure of Bangladesh’s economy is quite different from India’s. Unlike India, where the services sector contributes overwhelmingly while industry’s contribution is much lower than desired, Bangladesh, as the Chart 3 shows, has a booming industrial sector.

This allows its economy to create jobs. In India, by contrast, the bulk of the population is still stuck in the agriculture sector, which contributes the least to the GDP. The industrial sector, which has the maximum potential to absorb surplus labour from agriculture, is struggling to grow fast enough and create employment.

“Growth in garment exports rose from 8.8 per cent to 11.5 per cent, reflecting strong demand from the US and newer markets for Bangladesh like Australia, Canada, India, Japan, the People’s Republic of China (PRC), and the Republic of Korea,” states the ADB report. Such a remarkable export performance stands out especially since “garments accounted for 84.2 per cent of exports”.

Even at a time when the global demand is declining, and despite having a limited bouquet of export commodities, Bangladesh was able to push more exports by finding newer markets and edging out other garment exporters such as India.

Compare this to India’s anemic performance wherein exports have grown by just about 1.5 per cent per annum on an average since the financial year 2012-2013.