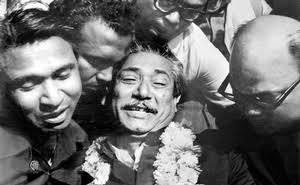 The historic Homecoming Day of the Father of the Nation Bangabandhu Sheikh Mujibur Rahman will be observed today across the country in a befitting manner.

Bangabandhu, the undisputed leader of the nation and supreme commander of the country’s Liberation War, returned to the sacred soil of independent Bangladesh via London and New Delhi on January 10 in 1972, after 290 days of confinement in Pakistan jail.

Bangabandhu was subjected to inhuman torture in captivity, where he had been counting the days to the execution of a death sentence that was pronounced against him in a sham trial.

Bangabandhu inspired the birth of Bangladesh. He was the inspiration for the freedom fighters. Even after Pakistan’s surrender on December 16, the people felt restless and incomplete in the newly-independent nation until they had their leader back among them.

Owing to his uncompromising leadership, Bangladesh achieved the ultimate victory through the nine-month Liberation War in 1971. The defeated Pakistani rulers were finally compelled to release Bangabandhu from jail. The victory of December 16 attained its fulfilment with his release. Bangabandhu flew back to in Dhaka via London and a brief stopover in New Delhi.

Besides, a delegation of Bangladesh Awami League will visit the mazar of Bangabandhu at Tungipara at 11 am.

A discussion meeting will be held on Tuesday at 3:30 pm at the AL central office at 23 Bangabandhu Avenue where Prime Minister and AL president Sheikh Hasina will join through a video conference.

In his message President Abdul Hamid said “As long as Bangladesh and Bengalis exist, Bangabandhu will be the source of inspiration for all. Today, Bangladesh is moving forward at an irresistible pace on the development highway under the leadership of Prime Minister Sheikh Hasina. Bangladesh has evolved from a least developed country to a developing country.”

“If this trend of development continues, Bangladesh will become a developed and prosperous country by 2041,” he said.

“Following the path of success in building ‘Digital Bangladesh’ by 2021, we will be able to move forward with more courage and confidence towards building a developed Bangladesh by 2041 - this is my expectation on Bangabandhu’s Homecoming Day,” he added.

In her message, the Prime Minister said, “The greatest Bengalis of all time in the history of Bengali liberation struggle, the Father of the Nation, Bangabandhu Sheikh Mujibur Rahman was released from prison in Pakistan and returned home on this day in 1972. The people of newly independent Bangladesh got back their most beloved leader. With the arrival of the Great Leader, the joy of the final victory of our liberation war was fulfilled.”

She also urged all to uphold the spirit of independence achieved at a cost of three million martyrs and two million abused mothers and sisters.

“Inspired by the motto of the Great Liberation War by resisting all imminent conspiracies, together, we shall play an effective role in building the ‘Golden Bangladesh’, the father of the nation’s dream,” she said.