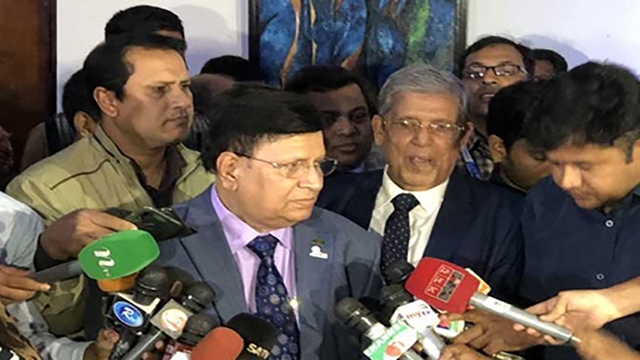 The government will not arrange the return of more Bangladeshi nationals from China amid the coronavirus outbreak that claimed more than 1,000 lives, Foreign Minister AK Abdul Momen said.

“The question is whether we'll send a flight to bring them home and spend the money of our people. We’re very much sensitive on the issue. Many of their parents have requested us to bring them. We have no objection if the parents can bring them home. They can come on their own,” Momen told reporters on Tuesday.

“It cost us Tk 30 million for the flight when we brought the Bangladeshi nationals earlier. We don’t have any fund left,” he said.

“We told the parents that they can bring their children home, as we haven’t cancelled the flights from China, especially from Kunming and Guangzhou,” Momen said referring to the families of students living in China.

The reporters asked if a shortage of funds is stopping the government from bringing the Bangladeshis back from China.

“Not necessarily. We can’t quarantine the fresh batch of returnees unless those staying in the Hajj Camp leave,” Momen said.

“We said that if they want to come, we’ll definitely check them upon arrival and take them to the quarantine.”

“We confront other problems while bringing back and quarantine them at the government’s cost. We’re are a densely populated country, making it difficult to quarantine people,” said the foreign minister.

“This is because the parents, friends and relatives go to meet them. Sometimes the people in the quarantine go for prayer. They can transmit the disease while going for prayer,” he said.

“A small number of countries, including the United Kingdom, United States, Japan, India and Singapore, brought back their nationals from China. Hundreds of other countries have their citizens still residing in China. The Chinese have warned them on the issue and they’re taking care of it,” Momen said.

“Our students complained that they are not given food, but when we queried the Chinese authorities said they provide food and drinking water on time. Two senior Chinese officials are appointed to look after them. They are doing more or less well,” he said.

The minister is clueless on Saudi Arabia’s move to repatriate 42,000 Rohingyas to Bangladesh, as reported in the media.

“We have no information on it. Saudi Arabia didn’t inform us about it and we don’t see any reason for them to do so. If Saudi Arabia wants to repatriate the Rohingyas, they should be sent to their own country; why would they send the Rohingyas to us?” said the foreign minister.

He spoke to the media following a prize distribution ceremony on an essay competition and reception of freshers organised by the World University of Bangladesh.